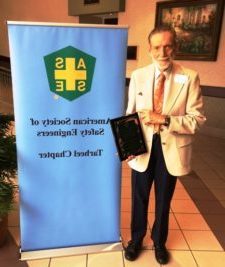 The Tarheel Chapter of the American Society of Safety Engineers formally inducted Fred Freiberger into their Hall of Fame in a ceremony taking place at the North Carolina Statewide Safety Conference in Greensboro, North Carolina on May17, 2017.Mr. Freiberger is the first-ever Hall of Fame inductee of the Tarheel Chapter which was chartered in 1961. The honor is based on several criteria including leadership, years of service, and promotion of the Safety profession. Mr. Freiberger is the only 3-term serving Tarheel President and is a former Safety Professional of the Year. He has earned multiple certifications including Certified Safety Professional, Certified Industrial Hygienist, and Professional Engineer.Freiberger’ s professional interest in safety dates back to the early 1960’s when he won an award for his redesign of a major interstate highway in midtown Hartford, Connecticut as a university graduate school project. He has worked on high profile projects throughout his career including; on site safety engineering support for the relocation of the Cape Hatteras Light House, recovery of the submarine Hundley project, human factors engineering for NASA astronauts, air traffic control radar system improvements for the FAA, and consulted on multiple rapid transit systems at airports all over the US.Freiberger previously worked with IBM, United Technologies, and Liberty Mutual Insurance Company and as a private consultant. He has served as an adjunct professor with the North Carolina University Consortium and the Occupational Safety & Health Educational Research Center (OSHERC) at UNC Chapel Hill. Fred continues to keep busy with projects involving hospital acquired infection control and food borne illness prevention activities.

ASSP is a global association for occupational safety and health professionals. For more than 100 years, we have provided education, standards development, advocacy and a professional community to support the advancement of our members and the profession as a whole. Our members are dedicated to creating safe work environments by preventing workplace fatalities, injuries and illnesses. Sound safety practices are both socially responsible and good business, leading to increased productivity, a better reputation and higher employee satisfaction.